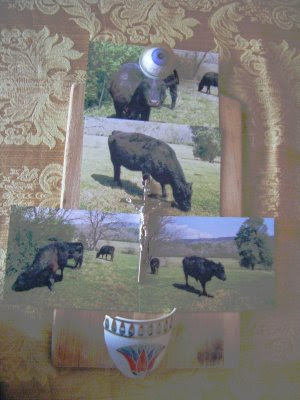 While the bombs fell between the 20th and 21st of April 1944, people prayed at the feet of the Crucifixion at Sacre Coeur. Montmartre was spared. I can’t help but feel it was their
collective prayer that saved them rather than the stilled heart of a dead man, as full of grace as he might have been. There was no one then to pray for his salvation. He was betrayed. No one saw it coming.
I followed the Stations of the Cross, its brilliant mosaic transforming what must have been a messy business into a spectacle for the eyes. From the gleaming dome above, Le Seigneur, all cleaned up and risen from the tomb, bestows his blessing, substantiating triumph over death.
Once a year his betrayal is re-enacted. We all know what’s going to happen but we can’t do anything to reverse it. We can elevate it to sacrifice, feel better about the comparatively small betrayals we commit. We are all Judas. Only Jesus is the savior. His message was simple: Save yourself. But a game of telephone was in operation, and the road to dogma is paved with competing intentions.
Did he really die for our sins, or was he merely being consistent? Here, you can own another’s pain without having to really suffer it. You can be protected and forgiven. All human misery is swept under the shade of an ancient oak whose acorn happened to fall on good soil.
A martyr chooses death. Jesus’ Passion might have been an unfortunate political accident. Or else Judas helped to ensure He carried out his destiny. Most of us die for no reason. Insight might come early or not at all. We may live rich, complex lives that are woven into a larger, ongoing narrative. Or we may be easily forgotten. How many bibles have gone unwritten?

At the entrance, security guards scan the crowd. A man directs people to the side aisles or the pews, depending on whether they’re coming to pray or coming to look. He repeatedly puts his finger to his lips—sshhhh! They have lots to see and say. Some are in awe. Some are making arrangements for later when they’ll go for moules frites. Scowling, he continues shushing, pointing to his head to remind them to remove their hats, shaking his finger at the one-eyed monsters to put their cameras away. He protects the Sacred Heart with the authority vested in him by the Holy Fathers who take his confession and hand him the Eucharist. The end is always near. You try to see it coming.
*

I thought the services would start at 5:30, so I was seated in the second row by 5:25. But this is Good Friday not a routine Vespers service. After an hour, a nun in a white robe and black wimple walks out to the front of the apse and sets up a microphone. She moves like an actress playing a nun. Men in lab coats come out and place the sacred objects and texts. A short, plump woman in a white lab coat appears with a rag and feather duster and tidies up. They have a brief conversation and walk back behind the apse. A handyman walks on, front left, with keys and a tape measure hanging out of his pocket. He looks around and walks off, leaving behind an odor of lubricating oil. Another half hour goes by. The pews are filling up.
A Black priest in a white robe comes out. There is anticipation, especially in the first two rows, where those who came earliest have been sitting longest. But then, behind the priest is the cleaning woman again. They file off to the right. Some people are talking, others are praying. Some of the ones praying tell the ones who are talking to be quiet. An irritable exchange erupts between the two women next to me, who have been chattering away, and the woman behind, who chastises them. A woman many rows back is talking loudly. People are trying to quiet her. She becomes increasingly belligerent and it slowly becomes apparent that she is not in her right mind. A few people smile indulgently. Two nuns come out and hand out the texts for the mass. Another ten minutes pass. The nuns come out and take their seats on the sides and the noise subsides a little. Another twenty minutes pass.
I read the whole four pages of the mass. My eyelids fall closed and I drift into a mild state of meditation. The woman next to me stands suddenly. I jump up from my seat, surprised at my own reflex and realize that, although I never thought it possible, I have been hypnotized. The procession has begun.
A cardinal and three priests are in front. One of the priests is old and feeble. All kneel down and prostrate themselves before the marble Crucifix. When they stand, the two on the outside pull the old one up by his elbows. He stumbles to his feet, a tuft of white hair sticking up from his head. The angelic voices of the nuns sing about the Royal Kingdom of Heaven. I sing along, following the printed text, in exalted French. The Passion is read by three priests. The cardinal speaks the words of Jesus in a deep, commanding voice. We all stand and the nuns sing, in crystalline harmony, the adoration of the Wooden Cross:

Here is the wood of the Cross
that carries the Salvation of the world,
Come, let us adore it.

The Wooden Cross, carved in olive wood, is carried from the back by a procession of robed men. When they reach the apse they hold it vertically so the priests and altar boys can each in turn come forward to kiss it. After each kiss, a priest wipes the spot clean with a handkerchief.
Then the nuns line up. They kiss the naked Jesus all over his stretched out body, under his ribs, his armpit, his thighs, his hands, his feet. They know how much he suffered for them, how much he loves them. And they love him back. The priest swabs each kiss with his handkerchief.
After this the pews empty into the aisles. The line is slow and as I come nearer my eyes are ineluctably drawn to the loincloth. I sense a nudge from the devil but head for the foot. The priest points to the blank surface of the cross, indicating where I must kiss it, shouting, “Le pied! Le pied!”—and I begin to think my eyes have betrayed me. Or the priest has read my mind. I am convinced he is able to see transgressions before they happen. I walk past his finger and put my lips to the exquisitely carved toe, the tendons strained in agonized submission.
The nuns sing:

O Cross, burning bush of the Revelation,
Vineyard of ruby Blood, Olive Tree of benediction,
O Cross, dark and faded wood where the Spirit whispers, we adore you.

Words so holy even the metaphors are Capitalized.
*
Betrayal

Walking back from the church I notice signs hanging outside many apartment windows that read, Vendu. The word ‘vendu’ means ‘sold.’ It also means ‘traitor.’ This seems serendipitous. We find ourselves inhabiting a world where the structures we’ve trusted to protect us have betrayed us. Time and space have become commodities beyond our means—The weak may inherit the earth, but the traitors have the best real estate. So at least here, in Paris, you’re safe from traitors if you pay attention to the signs.