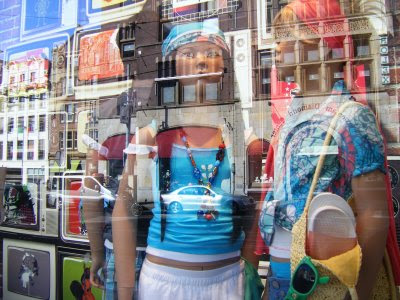 Rene was pissed because she thought Marsha had caused a big fight between her best friend and her best friend’s boyfriend, who’s also an old friend of Rene’s, besides being René’s other best friend’s ex-husband, by re-telling a story to Rene’s best-friend’s boyfriend and getting it all mixed up and sending the boyfriend back to his girlfriend in a jealous rage.
René and Marsha hadn’t spoken in three years and it got back to Marsha that René had told some confusing version of a perfectly innocent and normal situation having to do with Marsha’s best friend which in the telling implied something else, or at least left a few things open for question.
It was one night when René was sitting around with her oldest best friend, Sherry, who happened to be Rene’s best friend’s boyfriend’s ex-wife, drinking red wine and cognac.
Marsha used to be almost-best-friends with René, but three years ago Marsha tried to take advantage of the good nature beneath Rene’s coarse exterior, because beneath Marsha’s smooth exterior lies a cauldron of fear and envy, which cooks up to a pretty deadly stew.
René said to Sherry, “Have you ever seen Marsha with a pretty woman?
Are any of her friends pretty?“
“Well you’re pretty,” Sherry answered.
“Oh, I’m acceptable, but have you ever seen Marsha be friends with a beautiful woman? No! Never!”
Sherry considered Rene’s thesis.
Marsha had gotten a nose job about five years ago. She’d had a magnificent nose, very large and positively sculptural. It was her signature feature. When you thought “Marsha,” there was a deeper more subliminal thought: Nose.
About a year before the nose job, probably in preparation for what she had planned as a complete overhaul, Marsha got braces. That was unfortunate because the way her teeth protruded a little had given her an even more distinctive look.
It wasn’t just her quirky looks, either. She’d had an ironic sensibility, an eccentric sense of humor, both of which informed the conceptual art objects she produced, as well as making her an entertaining dinner guest.
After her braces and nose job she looked like everybody’s idea of attractive, and she slowly molded her personality to accommodate the bland features that she’d neatly organized, like a mannequin, around her messy human core.
She gave up making art and took a job at a bank. At dinner parties she talked, with little irony, about other people and clothes. René stayed friends with her because she was one of her oldest friends. Rene’s like that.
But Marsha, not fully satisfied with the course her life was taking despite all her physical adjustments, started cooking up a big soup of disappointment and despair, until she was completely transformed by hate.
One day, after Rene confronted Marsha, saying she was pissed about the incident with Rene’s best friend and her best friend’s boyfriend, Marsha wrote a letter to René:

Dear René,
If you ever mention my name in public again I’ll tell your boss you’re giving clients a 25% discount for your services and seeing them from your home.

René never cries. She never cries in public anyway. You could know her for thirty years and never see her cry. But when she told this story that night to her best friend, Sherry, as she’d downed a couple of bottles of red wine and smoked a pack of Rothman’s Mild while Sherry drank green tea and smoked a joint, Rene cried.
Sherry, who loved René dearly because she knew her true nature, and also knew how much she loathed crying in public, listened.
Then René said to Sherry, “And you went to her wedding!”
Sherry protested: “But you never told me about the letter, how could I have known?”
René explained through tears and sobs that she hadn’t told anyone, until now,
how scared she’d been, but now that she had a new job she was free to tell whoever she felt like.
Sherry said, “René-e…I’m a single woman. It was a chance to go out and….”
“But she hardly ever saw you. She saw you, what? two? maybe three times a year? She invited people she saw three times in her life! She has no friends!”
“I’m sorry, Sherry said, eyes wide. I didn’t know. You didn’t tell me.”
“Do you know how scared I was? I couldn’t say anything to anyone. She said I should never say her name in public again. I could have lost my job. I could have lost everything. My co-op. Everything.”
Then they went to the movies.

© Bonny Finberg
Posted by Traveler's Journey in Babel at 2:55 PM