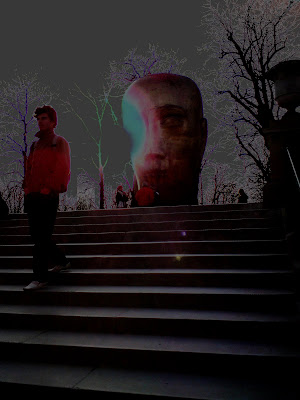 Looking back from some distant future one might write: “They thought existence, or consciousness, could be captured as if it had a place or time, deifying constancy, ignoring the fact that nothing ever finds a corner or enters a moment, that everything is transience and momentum.” Either there is one limitless form or limitless varieties of form. And love, whatever you think it is, requires duality, bi-directionality, or it dissipates, or tries to consume itself. Even self-love is a splitting, fragmentation of the self into objects and subjects, interchanging perspectives in an orgy of interactions, a world inhabited by lovers, ex-lovers and possible lovers.
Wars are fought depending on what tribe you belong to. Both alliance and enmity are presumed to share the same rules of survival and destruction. The body remembers best what history dilutes. Put bareness and scarcity in the center of memory. Eventually ancestors accrue, leaving footprints across the desert as its perimeters recede behind urban landscapes. We implode toward cities. We create and consume technology which usurps the evidence of our bodies. We conglomerate. We shatter in self-love. We rush toward self-conflagration. Eventually the trench’s stink habituates. Stagnation blazes in self-consumption and existence hovers over the prodded corpses. Substance is illusory. It continually expands. The task of investigating the complex nature of things is monumental and potential answers too ambiguous for dabblers. Some of us figured out how to transform sustenance into transcendence. Probably through methods that would disgust the eulogizers and exploiters now trading in consciousness as if the universe were linear and unilaterally determined. Binary models inhibit the future. They centrifuge irregularity, asymmetry and ambiguity. The mandates of empiricism exfoliate belief in God’s right to order the universe. Determinism crucifies inquiry. Each system is seductive: Yes or No; Light or Dark; Being or Non-Being. Either/or agrees to lead us through the labyrinth of our desires, implies a contract between the conflicting bases of our plurality, becomes a greeting across the boundaries of our values. As one Time and Space tycoon might put it: “Feed it or eat it.” But all this spending makes us a target for wandering bad boys. We are only made of fish spines, of hollow twigs, of sand. Knowing others desire you engenders certainty, as does physical power, as does the monstrous bulk of chauvinism covering you from the shadows like a bodyguard. We begin raising questions about the holiness of our ancestors. We ask, “What does it matter if we destroy innocence?” forgetting that existence is a fragile insect hanging on a web of chaos.
Posted by Traveler's Journey in Babel at 7:50 AM