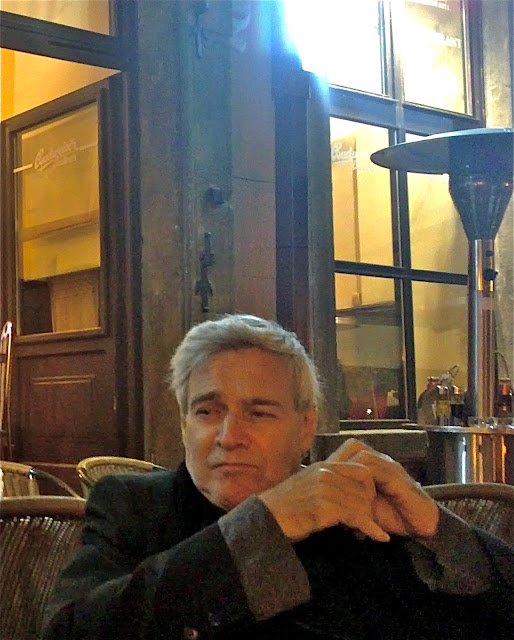 What is the working title of the book?
A Superintendent's Eyes

Where did the idea come from for the book?
a good part of my life from early adulthood until my 50's (when i was actually the super of my building)incorporating many episodes & dreams as they occurred but making it seem timeless while at times poetic - this is a revised edition with updates.

What genre does your book fall under?
prose/poetry -  prose poetry - haibun - semi-auto-biography

What is the one sentence synopsis of your book?
proletariat meanderings - the life & times of a disgruntled partial servant of the people - life as art & vice- versa

How long did it take you to write the first draft of the manuscript?
it was in fragments - not originally meant as a whole - so i can't really answer this accurately. the revised copy was of course easier.

Who or what inspired you to write this book?
me. my little life & some of what transpired within & around it.
reality/dream/laughter/tears/black comedy/poignancy/a place where one's insides mingle with one's outside(s)

What else about this book might pique the reader's interest?
the mixing of styles & processes. glimpses at reality & surreality

Will your book be self-published or represented by an agency?
it will be published by unbearables/autonomedia press

What is it that you want of a book?
that it be both infinitely readable as well as unreadable & that it meet all the qualifications, standards  & desires i imagined it would when i created it & of course to sell it.

steve dalachinsky was born in 1946, Brooklyn, New York right after the last big war and has managed to survive lots of little wars. His work has appeared extensively in journals on & off line including; Big Bridge, Milk, Tribes, Unlikely Stories, Ratapallax, Evergreen Review, Long Shot, Alpha Beat Soup, Xtant, Blue Beat Jacket, The Brooklyn Review. He is included in such anthologies as Beat Indeed, The Haiku Moment, Up is Up But So is Down: NYU Downtown Literary Anthology, the Unbearables anthologies: Help Yourself, The Worse Book I Ever Read and The Big Book of Sex (of which he is a co-editor) and the esteemed Outlaw Bible of American Poetry. He has written liner notes for the CDs of many artists including Anthony Braxton, Charles Gayle, James "Blood" Ulmer, Rashied Ali, Roy Campbell, Matthew Shipp and Roscoe Mitchell. His 1999 CD, Incomplete Direction (Knitting Factory Records), a collection of his poetry read in collaboration with various musicians, has garnered much praise. His chapbooks include Musicology (Editions Pioche, Paris 2005), Trial and Error in Paris (Loudmouth Collective 2003), Lautreamont's Laments (Furniture Press 2005), In Glorious Black and White (Ugly Duckling Presse 2005), Dream Book (Avantcular Press 2005), Christ Amongst the Fishes (A book of collages, Oilcan Press 2009), Insomnia Poems (Propaganda Press 2009), Invasion of the Animal People (Propaganda Press 2010), The Mantis: collected poems for Cecil Taylor 1966-2009 (Iniquity Press 2011), Trustfund Babies (Unlikely Stories Press The Veiled Doorway & St. Lucie (Unarmed Press 20012) and Long Play E.P. (Corrupt Press, 2012). His book The Final Nite (complete notes from a Charles Gayle Notebook, Ugly Duckling Presse 2006) won the 2007 Josephine Miles PEN National Book Award. His most recent books are Logos and Language, a collaboration with pianist Matthew Shipp (Rogueart Press 2007), Reaching into the Unknown, a collaborative project with French photographer Jacques Bisceglia, RogueArt 2009). His latest CD is Phenomena of Interference, a collaboration with pianist Matthew Shipp (Hopscotch Records 2005). He has read throughout the N.Y. area, the U.S., Japan and Europe, including France and Germany. He is a contributing writer to the Brooklyn Rail. His book A Superintendent's Eyes (Hozomeen Press 2000) is being reissued by Autonomedia/Unbearables in an expanded/revised edition in late fall 2013. His latest cds are collaborations with saxophonist Dave Liebman, bassist Joelle Leandre and an experimental French rock Group the Snobs.

Posted by Traveler's Journey in Babel at 7:07 PM