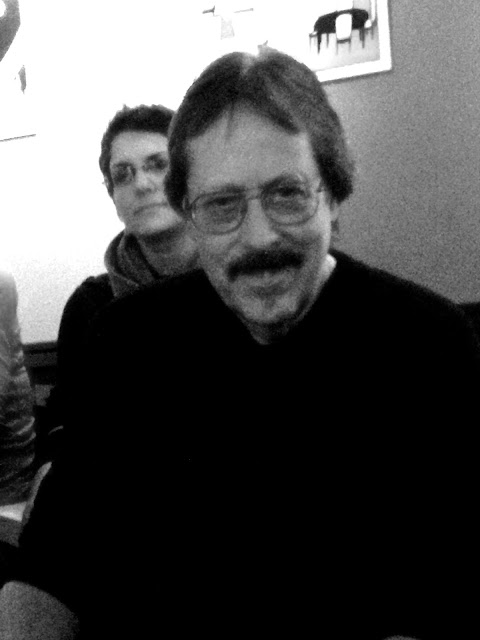 What is the working title of the book?
Divine Comedy.

Where did the idea come from for the book?
I wanted to do a collection of my newer poems for awhile.  I got the idea of using Fly By Night Press from George Spencer; I really liked his book, Unpious Pilgrim.  I also admire Steve Cannon, and the other books he's published.

What genre does your book fall under?
Poetry.
What actors would you choose to play the part of your characters in a movie rendition?
It's always Hollywood in this culture; celebrities.  This time period is the worst of the fucking fifties; not the Beats, but the fear of being different -- everybody with their short hair; all ready to go off to war, or away to summer camp -- this culture is awash with kids; shallow immaturity -- jeez, fuck Hollywood.  Watch Tarkovsky, Bunuel... something with some depth... Jarmusch even.

What is the one sentence synopsis of your book?
Wow, ok -- This sequence of poems is an attempt to delineate, not understand, the sequence of emotions involved in falling into and out of love. along with a bunch of other stuff.

How long did it take you to write the first draft of the manuscript?
Fifteen years.

Who or what inspired you to write this book?
Peter Handke.

What else about your book might pique the reader’s interest?
The sex bits.

Will your book be self-published or represented by an agency?
No and no.

What is it that you want of a book?
I was a dipshit fascist growing up in Pennsylvania when I stumbled upon the Beats and Catch 22.  Those writers (and books) made me realize, among other things, that Vietnam was immoral, and so I volunteered to work in Appalachia as a community organizer.  I sincerely hope that my tiny texts reach some kid out there in the hinterlands and steer him, or her, to a different shore -- maybe evern more than one person -- one tries to amplify as best one can.

Ron Kolm is one of the founding members of the Unbearables literary collective, and an editor of several of their anthologies: Crimes of the Beats, The Worst Book I Ever Read and The Unbearables Big Book of Sex! Ron is a contributing editor of Sensitive Skin magazine and an associate editor of The Evergreen Review.  He is also the co-author, with Jim Feast, of Neo Phobe, and the author of The Plastic Factory.  A new collection of his poems, Divine Comedy, is forthcoming from Fly By Night Press.  He’s had work recently published in Jeff Wright’s LiveMag, and Steve Cannon’s Gathering of the Tribes Kolm’s papers were purchased by the New York University library, where they’ve been catalogued in the Fales Collection as part of the Downtown Writers Group.  He has worked in most of New York City’s independent bookstores, including the Strand, St. Mark’s Bookshop and Coliseum Books.  He currently works for Posman Books in Grand Central Station.
You can see him interviewed on Poetry Thin Air.

Posted by Traveler's Journey in Babel at 12:53 PM