Here's the next installment of the NEXT BIG THING PROJECT. I'm glad to host bart plantenga's self-interview.
bart, formerly a DJ on WFMU, hosts a freeform radio show from Amsterdam called Wreck This Mess.
His blog is called Wreck This Cloud.
His novels Wiggling Wishbone (Autonomedia, NY) and Beer Mystic are underground classics. See a video excerpt here: http://www.youtube.com/watch?v=OqEeL1QzGsc
*** 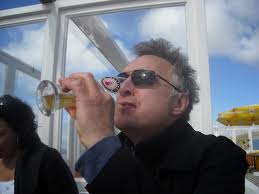 What is the working title of the book?
Radio Activity Kills
Where did the idea come from for the book?
The idea came out of desperation & experiences beyond the ken of normal sentient beings down a dead end where the chosen & discarded confuse one another. the idea also arose out of the fact that no one has ever written a novel of some caliber on the subject. Don’t get me started; OK, but now that you have... In 2012, after 8.33 years of bickering with my latest book YODEL IN HIFI: From Kitsch Folk to Contemporary Electronica that addresses people’s comfortable preconceptions & socially determined prejudices on culture, here specifically related to yodeling; & after a decade-long protracted birthing process that produced the twin books PARIS SCRATCH & SIN PHONEY IN FACE FLAT MINOR, consisting of urban zen snapshots; & after the routine rejection of yet another version of the novel BEER MYSTIC by some 100+ gatekeepers [editors, agents, publishers] & then publishing the entire book online in a global pub crawl & producing a guerilla film of the book’s last chapter: Beer Mystic: Last Day on the Planet; I decided it was time to tell daughter Paloma Jet [13] that she must at all costs never harbor the delusion that writing can ever be considered a worthy, well-respected pursuit commanding any prestige or means for survival. In our rush to democratize we forgot criteria like talent. & since Paloma is smart & visually oriented, I am not worried. It is however then, never at a loss for words or rather not knowing what else to do, that I suddenly decided to give various shapeshifting experiences some definition at the peril of risking my mental wellbeing yet again.
What genre does your book fall under?
Somewhere between speculative-neurotic-metro-nerd-quasi-fiction & transgressive-black-humorist-implausible-memoir-manifesto: imagine characters from the old sitcom WKRP played by Monty Python offspring in a script written by Dostoyevsky, the channeled voice of Lester Bangs & the comedic talents of writers fired from the sets of various harebrained teen sex comedies.
What actors would you choose to play the part of your characters in a movie rendition?
They will be unknown but gifted non-actors with a link to the milieu & zeitgeist [not a type of beer, although why not]. They would reside well outside the realm of the entitled & connected few & they will not have been tainted by formal training, Hollywood, or any professional workshopping-networking activities ... They will like both Jacques Tati & the Three Stooges, both Antonioni & Animal House & will have formidable music collections consisting of bands no one has ever heard of & they will have noticed something poetic about Doris Wishman’s movies & something inherently humane in the spirit of Jon Peel. They will have spent some time doing menial, underpaid labor & take that with them on their journey.
What is the one sentence synopsis of your book?
Radio as lived environment, sexual aid & alternative reality; a space where the cultural battles will be fought. & those [wo]manning the barricades will have only their wits & their encyclopedic knowledge of obscure & neglected musics as their weapons.
How long did it take you to write the first draft of the manuscript?
26.2 years experience + an estimated 1.44 years of scribbling...
Who or what inspired you to write this book?
Squat-pirate-illegal-alternative radio, faceless radiomakers with homemade egos – & their mothers, partners & enemies operating in straight/compromised media outlets...
What else about your book might pique the reader’s interest?
Their deep understanding of irony & satire will not be enough to save the main characters from a perdition that will be bearable only to some. Their sexploits will redeem certain bad decisions they have made although the STDs contracted will not. The novel will not be your standard musical although many of the main characters will speak in lines cribbed from the lyrics of obscure & sometimes touching soul, hillbilly, blues & novelty songs. The revolutionary impact of their actions will surprise even them.
Will your book be self-published or represented by an agency?
Neither - it will be via a third way...
What is it that you want of a book?
The book should – or rather the text or rather the texture & ambience of the text – should serve as a lived environment, as an auxiliary, alternative halfway house somewhere between fear & imagination, entertainment & the discomfort that comes with revelation. For instance, if the main character was a tongue s/he would be located equidistant from the teeth, cheek & throat. The main characters’ ventures into performed & recorded music can best be described as charming & portentous fiascos.
Posted by Traveler's Journey in Babel at 10:20 PM