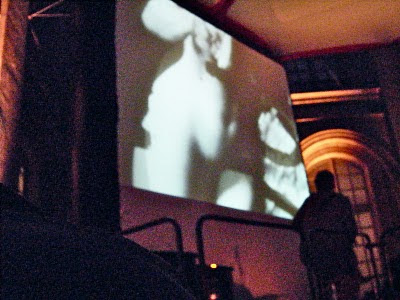 Performance at the Musée d'art et histoire du Judaisme
May 16, 2010 as part of the RADICAL JEWISH CULTURE:Scène New York.
John Zorn (saxophone), Trevor Dunn (contrebasse), Joey Baron (drums) play in front of Beat Generation artist Wallace Berman's first and only film, Aleph. Berman worked on the film from 1956-1966. He was killed in a car accident by a drunk driver in 1976, just before his 50th birthday.

Posted by Traveler's Journey in Babel at 9:46 AM