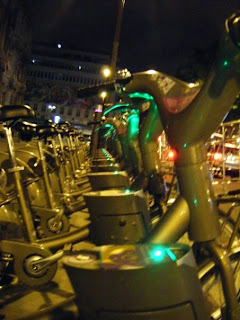 I'm trying to keep it together but disintegration is always at my heels. For a moment I considered re-titling this "The Daily Flog," but I spend so much time battling my tendency to complain that i decided against it. Anyway, I googled it and it's already taken. I will forge ahead with "the path of least resistance" if it kills me.
I decided to try to go against another natural preference of working at night when it's dark outside and I can control the light inside, and most people are home doing god-knows-what and I don't really want to know about it. I tried it and after a week of working in the daytime began to feel as if a gray muck was settling over my soul. Daylight is best for outside activity and I was slipping into a werewolf mentality. To remedy this I decided to go for an afternoon swim at the public pool and ride there on one of the new free for the 1st 1/2 hour bikes that the mayor of Paris had installed in mid-July, a system called VELIB. I used one once coming home late from a friend's and it was super convenient.
I packed my gear and went to the conveniently located bike station across the street from my apartment. There were no bikes. Ok, there's another one not too far, even though it's in the wrong direction. I get there and the computer screen tells me i can't get a one-day pass with my bank card. Ok, there's another one, this time closer to where I'm headed, but not so close to the pool to make me want to walk. I get there and there's one lonely bike left whose red light I foolishly ignore. I go through the registration process. It registers my bank card and charges me the one euro fee plus 150 euro deposit. I couldn't get the bike to release from the parking station, but ok, I should have paid attention to the red light, should have known better. Now that i've been charged, though, I'm determined to get on a bike, damn it. There's another station further along, almost all the way to where i'm going. It's out of order. I end up walking to the pool--I can always get on a bike to come home. There's a man outside the pool who tells me it's closed due to "technical difficulties." This is not the first time this has happened and i sometimes wonder if it's just a sneaky way for the staff to get a day to themselves. I know there's a bike station, not that close, in the opposite direction of home, but hey--i paid my one euro.
So i trudge over there and finally get a bike assigned to me by the computer--Number 6. I straddle Number 6, lower the seat and slowly find my balance with my heavy bag on my shoulder since if i put it in the basket i'm afraid the badly balanced bike will start wavering into traffic. I stay on the sidewalk just to be sure I make it home without being creamed by the Alain Delon wannabes on motos. I seem to be going over speed bumps, but i'm on the sidewalk and can't figure out why there'd be speed bumps on the sidewalk. I look down and it all looks like normal pavement so i get off the bike and give a look. My rear tire is flat. The question now is--where do i dump this thing? First i try the station that was out of order, thinking maybe I can drop off a bike even if i can't take one. Nope. I go back to the one that wouldn't take my bank card, but YES! it takes my bike. I apply a well-made chestnut cream crepe to my frustrated intentions and walk home.
In total, I spent an hour and a half within a half mile radius that I could have spent at the Louvre, or walking through the Luxembourg Gardens but let's look at it this way--there was a three point payoff: Even though I didn't get to swim, I got a major workout walking from station to station and then pedalling uphill on a one ton bike with a flat rear tire. The crepe was really good. I think i'm making progress with my attitude problem.
Posted by Traveler's Journey in Babel at 10:33 AM